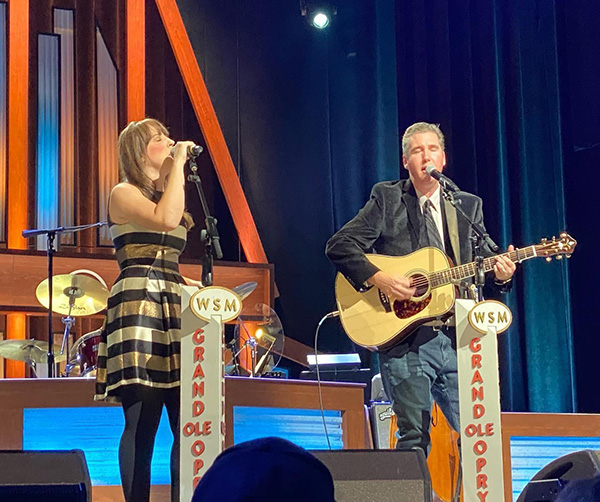 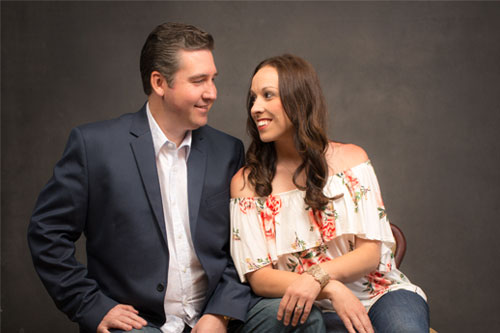 Darin and Brooke Aldridge are excited. And why not? With two new band members, a new record label, and five original songs on their latest album, the bluegrass and Americana duo are back with This Life We’re Livin’, their ninth recorded project together and first release on Billy Blue Records. This Life We’re Livin’ celebrates the space the husband-and-wife team now occupies – the top of bluegrass music.

Armed with the talents of the proverbial Triple Threat of uniquely distinctive singing, commanding instrumental skills, and accomplished songwriting, Darin and Brooke continue to ascend to new heights in the industry while maintaining their easy-going, down-to-earth connection with audiences everywhere. Brooke, a former runner-up on TV’s Nashville Star, is a four-time consecutive winner and reigning Female Vocalist of the Year for the International Bluegrass Music Association (IBMA). She is nominated for a fifth time in 2021. Once a six-year member of The Country Gentlemen with the late Charlie Waller, Darin is a former IBMA Mentor of the Year and a truly gifted singer and multi-instrumentalist. Together with their band – Billy Gee on bass, Samantha Snyder on fiddle, and Jacob Metz on banjo and resonator guitar – Darin and Brooke have been recognized with the IBMA’s nomination for 2021 Vocal Group of the Year. They have had multiple nominations over the years from the IBMA, the Society for the Preservation of Bluegrass Music of America (SPBGMA), and the Inspirational Country Music Association. They have enjoyed top spots on the Billboard, SiriusXM, Bluegrass Today, Bluegrass Unlimited, Americana/Roots, and Gospel charts. Their music videos have been featured on Country Music Television (CMT), CMT Edge, Great American Country (GAC), Bluegrass Ridge TV, and The Bluegrass Situation. Their television appearances include PBS’ Mountain Stage, Songs of the Mountain and Music City Roots; RFD-TV’s Larry’s Country Diner, Country’s Family Reunion, and The Woodsongs Old Time Radio Hour; Great American Gospel, The Bluegrass Road, and Blue Highways TV. Their long-held dream to one day play the Grand Ole Opry came true on July 4, 2017, and since then, they have graced the Opry stage more than 30 times.

Their rise became especially meteoric when they joined forces in 2016 with John Cowan, who plays bass for The Doobie Brothers and is a member of the Bluegrass Hall of Fame as co-founder of New Grass Revival. This collaboration has led to performance opportunities with artists ranging from bluesman Keb Mo’ to stints with Country Music Hall of Famers Vince Gill and Jimmy Fortune (The Statler Brothers). Says Cowan, “When someone asks me what I love most about Brooke and Darin, my response is – everything! Brooke’s angelic singing, Darin’s rock-solid baritone tucked up under her wings, their musicianship. But mostly, it’s their commitment to their beliefs that renders them to be gracious, concerned, and helpful to all they encounter. My music and interior life have been so tremendously enriched by the gift of their friendship.”

"There is a lot about the new generation of bluegrass that sure is inspiring. And Darin and Brooke are two of my favorites of this great new generation. I’m flattered that they included me in their new record and even better, to find out they are equally as great as people”.

Relix Magazine
“Husband and wife duo Darin & Brooke Aldridge have carved out one of the fastest rising careers on the acoustic music scene today.”

Darin and Brooke met in 2005 in their native North Carolina, and they bonded quickly over their shared love of music. Before they married in 2008, they decided to cull their extensive individual experience and create their own band. After many years of hard work, first in North Carolina and now the far reaches of the United States and footprints in Ireland and Prague, Darin and Brooke have developed a maturity in their music never more keenly heard than in the songs of This Life We’re Livin’. Says Darin, “We wanted to showcase more original tunes on this album and share another side of us that listeners haven’t heard before.” Original standouts on the project include “Grand Ole Circle,” which celebrates their dreams of playing the Grand Ole Opry; “Livin’ Mama’s Dream;” and “My Life’s Living Me,” a clear-eyed commentary on the joys and challenges of their musical success. Other noteworthy numbers are “Old Fashioned,” celebrating the kinder, gentler ways of the past, and “Blue Baby Now,” the first single from the collection. Another highlight is “He’s Getting Me Ready,” a gospel rouser featuring Country Music Hall of Fame members The Oak Ridge Boys. Oaks singer Duane Allen notes, “The first time I saw Darin and Brooke was in the middle of the Caribbean on a cruise ship. As I watched and listened, one word came to mind, ‘PURE.’ As they phrased their harmonies and bent their notes together, it was smooth as watching a taffy pulling. I loved recording with them. Their music is honest!!!” Joe Bonsall, the tenor singer for the Oaks, chimed in. “The Oak Ridge Boys love Darin and Brooke and considered it a huge honor to actually record a song with them … they represent class and and amazing musicianship and vocal talent … Brooke is one of the premier pure voices in all of music, and quite frankly I just love them both.”

This Life We’re Livin’ is a warm, cohesive collection that, as Brooke observes, “takes you a little further into the lives and story of Darin and Brooke. It paints the picture of where we started, dreams we had, and a life and musical journey that we feel blessed to share together every day.” It is that inviting, unaffected journey that draws listeners to the couple. It is the simple, positive message reflected in the music and lives of Darin and Brooke Aldridge that keeps them there.

Perhaps the key to their success lies in their mutual respect and admiration. The couple’s willingness to work hard, embrace opportunities and meet challenges head-on is paying off. Darin and Brooke are inspiring in their music, artistry, and commitment to continued evolution and growth. In following the path of their dreams, Brooke once noted, “We want our music to lift people up.” “It was an early goal of ours to put a positive message out there,” adds Darin, “and we decided a long, long time ago that we were going to be us, no matter what.”